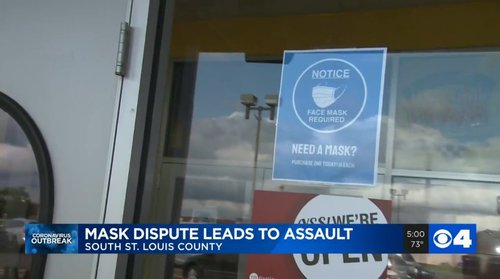 SOUTH ST. LOUIS COUNTY, MO (KMOV) -- Employees at a South County pizza and arcade center say they were assaulted and maced Sunday in a dispute over wearing masks.

Employees at Incredible Pizza Company on Lindbergh told News 4 they've had issues with some customers refusing to wear masks, something that is required in St. Louis County.

Surveillance video from the lobby shows a group getting escorted out. Employees say they refused to wear a mask. One person then turns around and maces three employees, including employee Laura Hackworth, in the face.

“I have blisters all over my tongue right now it's pretty painful even right now,” said Hackworth. “Once I was sprayed, I knew instantly what had happened and it was the worst pain I had felt in my life, just excruciating, burning obviously in my nose and mouth.”

Video from another angle shows a woman running back inside and macing another employee just seconds later.

“It was pretty intense and pretty scary how physical and fast it went down,” Hackworth said.

Hackworth says it all started before 5 p.m. in the game room when she asked three people to put masks on, a requirement in St. Louis County for everyone over the age of nine. She says that group refused, started cursing and spitting in her face.

“I just need you guys to go, let's get out,” Hackworth said.

She recorded a video of another employee escorting the group out, repeatedly asking them to leave.

“Sir, get out of the building, you need to go now,” the other employee said.

“They got in my face without masks on and just tried to spit and were promoting the coronavirus, calling me names,” said Hackworth.

”At that point punches were thrown, I was shoved, my cashier was shoved, we were spit on, we were ridiculed,” said managing general partner April Gamache.

Gamache says police arrived shortly after her employees were maced. Investigators arrested a 27-year-old woman and issued a summons for assaulting three people.

The company says they plan to beef up security to ensure nothing like this happens again.

US Marshals arrest man for murder of Florence woman