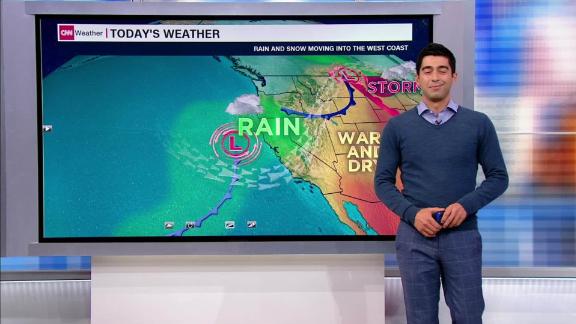 An unusual pattern for California with rain forecast as well as heavy snowfall for the High Sierra's at the start of the dry season. Pedram Javaheri has the details of how much they can expect.

Memorial Day weekend is just around the corner. Here are the 10 best places to go in the US. And here's what else you need to know to Get Up to Speed and Out the Door. (You can also get "5 Things You Need to Know Today" delivered to your inbox daily. Sign up here.)

Alabama lawmakers passed an abortion bill that supporters hope will be sent on a collision course with Roe v. Wade. Votes by the Alabama Senate sent the bill to the governor's desk last night. It's the most restrictive abortion bill in the country and would punish doctors who perform abortions with life in prison. Alabama Gov. Kay Ivey, a Republican, hasn't publicly taken a stance on the bill, but her anti-abortion views are well known. She has six days to sign the bill. If she does, the ACLU and Planned Parenthood say they'll sue, and a court battle is just what the bill's supporters want. They hope it eventually ends up in the Supreme Court and leads to the overturning of Roe v. Wade, the 1973 case that legalized abortion.

Looks like Donald Trump Jr. will appear before the Senate Intelligence Committee after all. The committee and Trump Jr. reached a deal for him to testify behind closed doors sometime in mid-June. The committee -- which is still looking into Russia's interference in the 2016 campaign -- had issued a subpoena for Trump Jr. to appear, sparking a huge backlash from President Trump's allies. Trump Jr. will be asked to answer questions about discrepancies between his past testimony and what other witnesses have told the committee and special counsel Robert Mueller, a source told CNN.

Facebook's new rules on live-streaming kick in today. Under the new guidelines, people who break Facebook's "most serious policies" will be immediately kicked off of Facebook Live for a period of time, like 30 days. The social media giant was under great pressure to do something after the gunman in the New Zealand mosque shootings live-streamed the attacks on Facebook. Meanwhile, San Francisco became the first city in the United States to ban the use of facial-recognition technology. That keeps city departments, like San Francisco's police force, from using the sometimes controversial technology.

The number of births in the US just keeps dropping. Births last year dropped to the lowest number in about three decades, a new CDC report says. The number of births was about 3.79 million, down 2% from 2017. The nation's fertility rate also hit a record low in 2018, with just 1,728 births per 1,000. That's down 2% from 2017. The fertility rate was so low in 2018 that it's considered below the level needed for the population to replace itself.

Yes, we know, yet another Brexit story. But please keep reading. UK lawmakers will vote for a fourth time on Prime Minister Theresa May's Brexit deal, which they've voted down three times before. And the prospects for passage this time don't look particularly good right now either. The vote will happen the week of June 3. That's the same week of the state visit by US President Donald Trump, so that will make for a fun couple of days. The UK has until October 31 to find a way to leave the European Union.

Tim Conway will forever be remembered as one of Carol Burnett's sidekicks, but the talented funnyman was so much more than that. He died at the age of 85.

Help is on the way

When a single mom needed financial help so she could move to Texas for a NASA internship, hundreds of strangers chipped in.

Meet the Ohio teen who lost 115 pounds after walking to school every day for two years.

Actress Constance Wu was less than happy that her sitcom "Fresh Off the Boat" was renewed, but ABC says it's not kicking her off the show.

The State Department has ordered non-emergency US government employees to leave Iraq and tells Americans not to travel to the country because of high risk of kidnapping and violence.

It's bath time, but Buddy the dog is getting the heck out of Dodge. (Click to view)